My trip to New York to see Phantom of the Opera 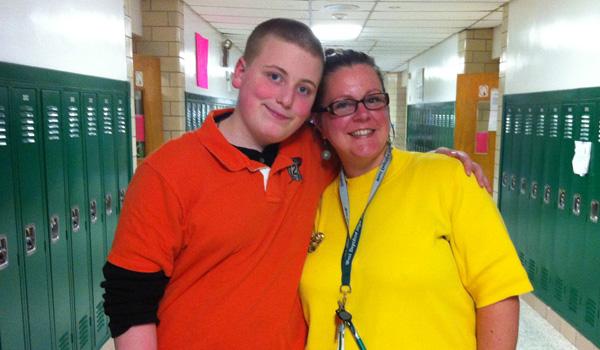 On a Wednesday morning in December 2012, Mrs. K, (Mrs. Krasting) my dad, Mr. Yerkes, the entire Madrigals/Choir, French students and I were going to New York for the whole day.  In the early morning at school, every kid including his/her parents was busy at school.   My dad and I were just arriving at school when we saw all of these cars pulling up to either park or dropping of their kids at the main entrance; my dad dropped me off.  When I got into the building, I saw a huge crowd of parents by the auditorium; in the crowd I could just barely catch a glimpse of Mrs.K.  Afterwards, Mr. Gismondi directed everyone, all of the French students and their parents to the auditorium.  Finally, after the crowd went away, my dad could reach me and Mrs.K, then Mrs.K gave us Phantom of the Opera magnets and maps to all of the stops that we want to see.

My dad, Mrs.K, and I went outside, and we found the two tour buses that we were going to take to New York.  Someone outside told us that we would have to take bus two, so Mrs.K questioned the bus driver if the bus that was closest to the main entrance was bus two.  He replied “yes” so we climbed on board; it was so cool.  There were lights on the sides, a bathroom in the back, movie screens (one in the front one in the middle and one in the back.) There were little foot rests on every seat except the first pair of seats on both left and the right side of the bus, plus this neat design on the roof, seats and floor of the bus.  Mrs.K, my dad, and I brought two back-packs.  In our back-pack, we had medicine, hats, gloves, four large water bottles, three movies (Madagascar 3, Europe’s Most Wanted, Three Stooges, and Arthur Christmas), and two cameras plus a camera case.  So all of the French students plus their parents, Mr. Yerkes, the rest of the Madrigals/Choir students and their parents loaded up on the appropriate buses.

Then the French teacher and Mr. Yerkes did a head count on both buses, and everyone was present. The two bus drivers started their engines. The cool part was hearing the roar of the engine. The bus was elevated. Then we got on to the highway and started to drive off to New York. While we heading towards New York, the bus driver made us watch a safety video that showed us some special features that the bus had. Once the video was over, we could watch any video that we wanted. I wanted to watch Three Stooges but we had to watch Harry Potter instead, which I really did not like. While about half way there, I caught a glimpse of a rainbow in a cloud and took a picture of that.

We finally made our way to the edge of New York. I could catch a picture of New York from a far.  The bus driver has made a few twists and turns, until we stepped upon a tunnel that goes under the water. There were lots of vehicles. On the other side we were in New York. Wow is there a lot of big buildings and traffic all round.  I never saw so many cops.  As we came to our drop off area, my dad, Mrs. K and I had no idea where we were and where to go, plus we can barely hear each other due to all horns honking and plus there were lots of people walking behind us.  So we all went to the giant TOY’R’US in Times Square. My dad led the way and when we came around the corner, there were so many flashing lights and the smells were incredible.  When we came to our next block, we saw TOY’R’US and so many other in front of us.  As we crossed the street, my dad and Mrs. K noticed that we were in Time Square right where the New Year ball drops. We could barely hear each other due to all horns honking, and there were lots of people walking behind us. All of us took pictures of that and many others during the day.  When we entered into the toy store, it was like nothing I ever seen before. This place had three levels (a basement, a 1st floor, and a 2nd floor) of toys and a huge Ferris wheel.  We looked around, and I asked if I could get the cheapest remote control helicopter, but my dad said that he would think about getting me that toy.

So once we were done in there, we went into the Disney Store. It was amazing. The Disney Store had two floors, but the part that took my breath away was this huge graffiti of Mickey and Minnie Mouse in the old days.  Minnie was sitting on the moon, and Mickey was right beside her. The Hershey store was like Willy Wonka’s Chocolate Factory. While I was in there, I saw a cute little pink teddy bear with some gum, and a giant Hersey kiss with little Hersey kisses inside, and many other stores around. The one thing that we all wanted to see was Rockefeller Center. Just to get to that place was a long walk, but it was worth it to see that huge Christmas tree all lit up on the way to the theater. I got a hot dog and a bottle of soda, and Mrs.K got a soft pretzel.  The hog dog didn’t smell too good, but it tasted delicious.  On the way there, we saw giant Christmas ornaments in a pretty fountain, and I stopped by a little souvenir shop. Then when I was in there, I wanted a New York snow globe, but it cost $40.00.  So then I found these Stainless Steel models. I got two of them, one for me and one for my brother.

Once we were done there, we had to catch up with the rest of the group and see Phantom of the Opera. Mrs. K has never seen it, but she has heard a lot of good things about it, but I have never seen this play, but my dad has seen the play in Philadelphia. He says this play is really good so I thought I would give it a try. During the play, there was a quick intermission part. Some people were selling Phantom of the Opera masks, snacks, and drinks, but I thought the play was over.  My dad said, “Relax, this is just a break time, and there is more to the play.” Once the play was over, it was time to have my first dinner in New York. We ate at a place called Bubba Gumps.

That’s right out of the movie Forrest Gump. This place was really neat in the décor, and the food was really good too. During dinner, the waiters and waitress were playing a trivia game, while our food was being prepared.  The burger that I ordered was delicious.  They actually cooked the patty like a steak, and the fries tasted like they came from Friendly’s.  After dinner, we wanted to go back to Rockefeller Center and see that huge tree all lite up in the dark. My dad and Mrs. K did not think we would have enough time to walk all the way back there and still make it back to where our buses would be picking us up.  We only had forty-five minutes before they came. I knew we could do it so we headed out to go see that tree at night. We did make it, and there were a lot of people there taking pictures. My dad took a picture of me and Mrs. K standing in front of the tree. Once we were done, we headed back to the pickup spot. We did make it in time.

Once we boarded the bus, Mr. Yerkes took a head count and told the bus driver it was all clear to started driving.  On the way out, I noticed all the things we had passed when we drove in.  We all decided that the drive home movie was going to be ELF. While on the drive home, I saw the Empire State Building lights and was trying to get a picture of that, but was unable to get it. While on the way home, I was having trouble staying awake just like my dad.  So when I finally caught my second wind, my dad and I started to goof off by talking about TV shows that we like to watch. We were only about 20 minutes away, and I wanted to watch Arthur Christmas, but it was too late.

We finally made it back to the high school, and I was really tired. Once we were off the bus, I said my good byes to Mrs.K. We had to walk back to my dad who parked his car and drove home. Once we got home, I went straight to bed and passed out.  I hope I can go there again next year and see more things.